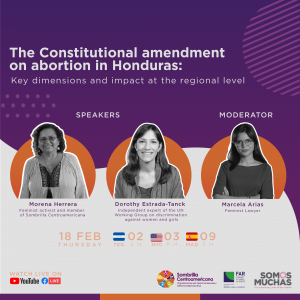 On Thursday, January 21, 2021, the Honduran Congress amended the Constitution of the Republic of Honduras to tighten the ban on abortion. The amendment to article 67 states that “the interruption of life”, by the mother or a third party, “is prohibited and illegal,” and that life shall be respected from the moment of conception. It adds that “this disposition can only be reformed by a three-quarters majority of the members of the plenary session of the National Congress.” With this change, it is virtually impossible to legalize abortion in Honduras. This amendment was approved by a majority of conservative deputies of the National Party and Liberal Party,[i] in response to business conservative groups and the Catholic and Evangelical churches.

The UN Working Group on discrimination against women and girls, a Special Procedure of the Human Rights Council, warned of the implications of the amendment for women’s human rights days before it was passed and noted: “Instead of taking a step towards fulfilling women’s and girls’ fundamental rights, the country is moving backwards.” The Working Group also stressed that this reform would “block any potential progress on women’s and girls’ sexual and reproductive rights in Honduras”.[ii] Other specialized bodies,[iii] civil society organizations[iv] and human rights mechanisms,[v] also have expressed concern.

Abortion has been prohibited in the Constitution of the Republic of Honduras since 1982. Honduras is one of six Latin American countries to fully criminalize abortion alongside Nicaragua, El Salvador, the Dominican Republic, Haiti and Suriname, including in cases of rape or incest, when the life or health of a pregnant woman is at risk as well as in cases of severe congenital defects. Criminalization of termination of pregnancy violates international human rights standards, including the right to life, the right to non-discrimination and the right to bodily autonomy, among others. The criminalization of abortion is known to increase the incidence of unsafe abortions and is a leading cause of maternal mortality and morbidity globally.

[iv] Press release: “National and international organizations come together to warn against constitutional reform in Honduras”.

[v] Mechanism to Follow Up on the Implementation of the Convention on the Prevention, Punishment and Eradication of Violence against Women (MESECVI).