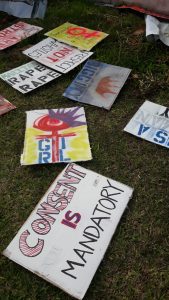 The English-speaking Caribbean consists of young nations that have been and still are heavily impacted by (neo-)colonialism, paternalism, and neo-liberalism. Small island developing states are particularly vulnerable to the effects of climate change. Many of these countries are dependent on tourism as well as the unpaid and underpaid labor of women. While it is seen as a buffet of vacation sites, the Caribbean is a place where people live, where various forms of oppression exist, and where gender-based violence is a pervasive issue that women’s rights and feminist activists—not always one and the same—are working to address. Some of the main challenges in addressing gender-based violence is the limited understanding of gender relations and the scarce resources to work on ideological issues while responding to the immediate material needs of women and gender minorities.

Many Caribbean countries introduced domestic violence legislation and amended legislation on sexual offenses after 1990. Still, the rate of violence against women is high, the stories are terrifying, and the response of the general public is, far too often, one of indifference. In a December 2016 policy brief, Inter-American Development Bank reported that one-third of residents in the Caribbean “understand” physical abuse against a woman if she is cheating. This was highest in Suriname, The Bahamas, and Guyana. In a 2014 study by College of The Bahamas, it was found that 58% of high school boys and 37% of high school girls considered men “disciplining” their wives appropriate. While this may contribute to older generations’ disdain for young people, feminists must recognize this as evidence of the need for earlier and more sustained engagement with school-aged children. Legislators cannot be our only focus; we have to be able to reach people who are impacted by the systems they live within and their early-life experiences that frequently indicate that women are subhuman.

Women are seen as sexual objects, property, and subservient to men. This attitude is, in many cases, supported by the law. It is also endorsed by religious leaders who insist on misogynistic, paternalistic interpretations of religious text. In The Bahamas, for example, marital rape is not illegal. Even in the draft amendment to the Sexual Offenses and Domestic Violence Act, the act is not defined as rape. Instead, it has been suggested that it be called “spousal sexual abuse” as it “avoids the stigma of a rape charge.” This is the Attorney General’s attempt to appease religious leaders who promote the falsehood that marriage is a religious institution which makes all acts within marriage permissible. Anything to the contrary is interpreted as an attack on the family. There is no concern for the women who are physically, emotionally, economically, and spiritually abused. There are many other examples of the law, lawmakers, and religious leaders failing to protect women and, even, creating environments in which the humanity of women is ignored and denied.

Legal reform is of critical importance for the Caribbean as it has been stuck with ancient constitutions, legislation, and amendment processes that are consequences of colonialism. For this reason, some programs—such as the Equality and Justice Alliance which provided technical assistance to governments and held convenings that included civil society—are designed specifically to assistant governments in reforming laws that discriminate against vulnerable communities including women, girls, and LGBTQI+ people.

It is undeniable that, as women work to improve our material conditions and others take note of their productive and reproductive contributions that gender ideology does not automatically change. In addition to the arguments that women’s economic progress means gender equality has been reached or is not necessary, arguments that we are “not ready for that yet” when protection and expansion of women’s rights is recommended have become commonplace. We know this will be an excuse, and we know that it is not a reason to wait while women continue to experience gender-based violence, some even dying at the hands of intimate partners. Women’s rights are human rights and human rights cannot be optional when withheld from vulnerable people until everyone is ready to acknowledge our humanity.

Legal reform, gender sensitivity training, increased awareness, public education, and societal changes need not happen one-by-one in a linear fashion. Attitudes are shaped by law, and the law must be responsive to our realities and congruent with international commitments. We have to agitate for legal reform, participate in interfaith dialogues, develop programs, render services, train law enforcement officers, run legal aid clinics, organize fundraisers, engage the media, shut opposition down, ensure our own safety and security, and grapple with court funders all at the same time.

One of the greatest challenges in the Caribbean is the lack of funding to feminist and women-centered organizations. Some countries, such as The Bahamas, are excluded from funding programs due to their Gross Domestic Product (GDP). Many organizations are ineligible due to their structure and (lack of) experience receiving and reporting on grants. In many countries, a large proportion of feminist work is undertaken by informal groups, grassroots organizations, and individual activists that do not fit into any of the existing funding models. Governments are able to access funding and technical support, only required to opt-in. But there is insufficient support for the people and organizations on the ground, providing resources and services for constituents, and engaging the general public in ways that give governments the support they want when making reforming laws.

Gender-based violence is one of the obvious areas of work for feminist and women’s rights organizations. We know the statistics, and we have all heard stories. The data, however, does not even tell the entire story. While domestic violence and intimate partner violence are frequently referred to as “low-hanging” fruit, we know there is resistance to our work. Beyond government-level advocacy and service provision, we need to expand conversations about gender-based violence, domestic violence, and intimate partner violence. Feminists and activists everywhere need to assess the way we use these terms and make them real to the people we are trying to reach.

We have to start with gender relations—a term used in academic spaces, but seldom made real, accessible, and relatable to people outside of feminist and academic spaces. We do not often talk about the concepts of men and women and the confines of masculinity and femininity, or how we came to believe who should do what. Simply saying, “the way it is now is wrong and hurts women,” does little if people do not regard women as human beings the same way as men. If people do not understand that women are human beings and that our rights are human rights, they will not easily accept even the lowest hanging fruit.

This is not unique to the Caribbean. This is a fundamental issue all over the world and is one of the most important reasons for us to build cross-regional solidarity, share resources, and trade skills. The issues we are working on at any given time may vary, but the issue of gender equality is at the core. Let’s go for the core, bringing our expertise and resources to the global network to create the tools we need to be more holistic in our approach. The more we work together on finding ways to address prominent issues like these, the more time and energy we have to dedicate to the daily demands of our work. Feminist solidarity has to be more than a “feel-good” moment; it has to be a core competency, a methodology, and a function of the networks we build and maintain.