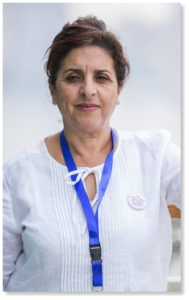 Gender-based violence and discrimination in Morocco is widespread. It affects about 2/3, or 62.80%, of Moroccan women, according to the High Commission for Planning. Additionally, according to the Economic and Social Council, more than 80% of mens’ requests for permission to marry underage girls are accepted by the judiciary, and only 7% of women own real estate and  1% of Moroccan women own agricultural land. Today, the law perpetuates discrimination between the mother and father in having the right of guardianship over their children, which works against the principle of the child’s best interest. COVID-19 has exacerbated gender-based violence, poverty, and discrimination in Morocco as everywhere else.

For years, women’s organizations from southern Mediterranean countries have worked to combat these societal problems. In Morocco, L’Union de l’Action Feminine (UAF), or the Union of Women’s Action, launched the Caravane Zéro Tolerance, a caravan carrying luminous panels from Tangier to Casablanca to raise awareness of the effects of gender-based violence and discrimination that leads to women’s and girls’ tremendous suffering. The mobile campaign supplemented other types of campaigns that are adopted annually by UAF members. These campaigns include press statements in newspapers, magazines, radio, and television, and a press conference organized by UAF. In this event, UAF presents its annual report and the emergency centers that are part of the UAF network all discuss numbers and cases that are supported throughout the year. This year, UAF, in partnership with the Euro-Mediterranean Women’s Initiatives Network and with the support of the European Union, organized a two-day discussion on November 28th and 29th, 2020, on “Gender Justice and Facilitating Remedies for Women Victims of Violence,” which addressed female judges, lawyers, Judicial Police staff, and justice system professionals.

Women’s human rights organizations will continue to implement activities to prevent and raise awareness of GBV and to protect women and girls, especially those from marginalized backgrounds. Women from the Global South have too frequently had to pay the prices of gender-blind policies, and it is time for states to abide by their commitments.