March 18th, 2019. FAR, along with the Center for Women’s Global Leadership (CWGL), MADRE, and the Women’s Human Rights Education Institute (WHRI), co-sponsored the first global consultation with indigenous women leaders to discuss the development of a new CEDAW General Recommendation on indigenous women’s rights. The meeting was convened by the International Indigenous Women’s Forum (FIMI) and attended by indigenous activist women from different regions, academics, and allies of the indigenous women’s movement. Rosalee Gonzalez, FAR Steering Committee member, participated in the event on behalf of the FAR. Also present were Gladys Acosta, CEDAW Committee member; Melissa Upreti, expert member of the Working Group on discrimination against women and girls (formerly known as Working Group on discrimination against women in law and in practice); Tarcila Rivera, member of the Permanent Forum on Indigenous Issues; and Chandra Kalindi Roy-Henriksen, Chief of the Secretariat of the Permanent Forum on Indigenous Issues.

While the CEDAW Committee has not officially announced it will draft a General Recommendation on Indigenous Women, it is likely this will happen in 2021. The main purpose of the first global meeting was to trigger consultation processes in different regions of the world, and to broadly set the parameters of a dialogue to inform a new General Recommendation, in terms of thematic coverage and representation.

FAR’s support for this event aligns with its commitment to working with marginalized groups of women, particularly indigenous women, to build new alliances.

In November 2020, the CEDAW Committee informed that the next GR will be focussed on the rights of Indigenous Women and Girls. 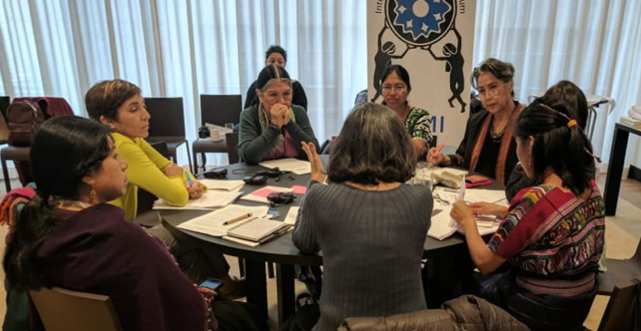 April 29th marked the 100th day of Trump’s presidency. To mark this day, the People’s Climate March(PCM) was held in Washington, D.C. This huge march brought together thousands of activists, and organizers from across the country. Check out pictures that we took at PCM: Find out more