When Hibaaq Osman or Dinah Musinderwezo speak, the world listens. Especially the world of human rights, gender equality and the likes of the new UN Secretary General at the 61st Commission on the Status of Women (CSW) earlier this March. 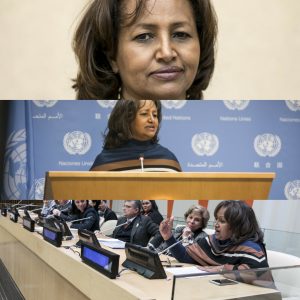 Hibaaq Osman founded and since founding it in 2005, she leads Karama, an organization that builds the strength and influence of Arab women leaders in regional and international contexts and to end violence against women. She works in partnership with civil society and youth leaders across the Middle East and Africa to promote women’s advancement, protection and security and advocate for their inclusion in decision-making and peacemaking frameworks.

Also as the Founder of the Global Dignity Fund and Co-Founder of the Think Tank for Arab Women, Hibaaq has launched civil society organizations in Libya and Syria.

From the get go, her mission has been to break down the silos around how issues are framed in international spaces. And when she speaks, the clarity is unmistakable. “How can you talk about peace and sustainable development without addressing the wars and conflicts ravaging so many parts of the world, especially in our region?” she asks simply.

“Who could reject the prospect of a world without poverty, without food insecurity, where everyone has access to clean water and we finally achieve equality for all, regardless of gender? This is a future that we all want and one we all want to be included in bringing about. But at every stage of the development, launch and implementation of the SDGs, we, as women in the Arab region, have made the same warning. The greatest enemies of any form of sustainable and resilient development are conflict and crisis.”

Hibaaq has been a fearless spokesperson calling on the enormous human rights violations that take place routinely in the Arab region, driven largely by imperialist foreign policy of the West. Be it the recent travel ban imposed by the Trump government, or the years of drone and military attacks on Iraq, Libya, Somalia, Syria or Yemen that mostly affect civilian lives. Or the occupation of Palestine. Or the impending threat of famine that will affect the lives of 20 million people. Sustainable development has to go hand in hand with ending these conflicts and ending the global bloated spending on defense. Follow the arms trade, and you follow the disturbing chain of violence, says Hibaaq:

“The flood of arms into the region has had terrible consequences that have reached well beyond our borders. Under Gaddafi, Libya spent $50 billion on weapons. Where are these guns now? Many have been found as far away as Nigeria, in the hands of groups like Boko Haram,” she noted.

There can be no development without peace, she says with clear logic. “And that is my message to a younger generation of feminists who she would like to see make these vital connections and not accept any status quo that doesn’t prioritize peace and ending violence alongside with promoting development and growth. We must get our governments to listen to women’s voices and perspectives.”

After all, the Arab Regional Network on Women, Peace and Security has demanded that we prioritise dealing with conflict in relation to the SDGs, to the League of Arab States and UN Women ministerial-level meeting on women achieving peace and security in the Arab region, to the Global Study and High-Level Review of Security Council Resolution 1325, at the World Humanitarian Summit, and virtually every year at the Commission on the Status of Women in New York.

“Whether it is the starving children in Somalia, Sudan and South Sudan, or the desperate refugees on the streets of Amman, Beirut, Cairo, none of us in the region need to search far to look straight into the eyes of those affected by conflict,” noted Hibaaq.

“At every stage of consultation of the SDGs and every opportunity since, we have said that it is not enough for conflict to be dealt with simply as part of a disparate goal – SDG 16. Conflict touches every aspect of the progress the SDGs bring. We know this particularly as activists for women’s rights.

The price of conflict for those directly and indirectly affected is extraordinarily high. I have talked about how it destroys the hope for sustainable and resilient progress, the price of our future growth and prosperity.”

But there is also a clear monetary value that we can place on conflict. Military spending in the Arab region is far greater than the global average, 65 per cent higher than the rest of the world. We have to create the reality that militarization is never an answer. If we are to have any chance of achieving the sustainable and resilient progress promised by the SDGs, then it must start by building a secure and peaceful foundation from which to build. 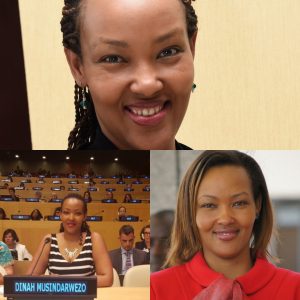 And building that solid foundation of inclusive development is what the life and activism of Dinah Musinderwezo is all about. As executive director of the African Women’s Development and Communication Network or FEMNET, she is determined to ensure that African feminists have a seat at the development table.

FEMNET is a pan-African Network that was set up to advance women’s rights and amplify African women’s voices since its inception in 1988. Over the years, FEMNET has played a central role in sharing information, experiences, ideas and strategies among African women in order to strengthen women’s capacity to participate effectively in the development processes on the continent. A membership-based organization with individual and organizational members in  43 African countries, FEMNET is African women’s collective leadership for equality, peace and progress. and has played a privotal role in building the women’s movement in Africa and has ensured that African women’s voices are amplified and influence decisions made at national, regional and global levels.

“The African women’s movement has been at the forefront of advancing women’s rights in the international arena and mobilized the rest of the women’s movement to its political possibilities,” she says, referencing the post-2015 development framework.

We saw this as the only way to have the voices, perspectives and ideas of African women and girls included in the global development agenda. Given the failed experience of the Millennium Development Goals (MDGs), we wanted Agenda 2030 to be different. Today we celebrate and look up to SDG 5 but it is important to understand it and embrace it in all its complexity and use it as a powerful tool in women’s rights and development work, she points out.

“I believe that the some of the most pressing issues affecting women in Africa is violence against women in all its forms and discrimination of women in owning and control of resources, especially land. It is mainly because of gender discrimination that women experience many other issues such as lack of sexual and reproductive rights, that majority of women are poorer, majority of women work in informal sector with no protection and benefits and few women are in decision making positions in all sectors including the public and private sectors. There is need to work towards changing gender/power relations through changing economic, social and political policy frameworks that perpetuate gender discrimination. This must be followed by change of attitudes by both men and women towards men and women and their gender roles.

We have all been working towards the above but I feel that little has been done to change gender /power relations. We work towards getting more women participating in the political arena, more women in formal employment, in education and we have achieved major milestones in those areas, but if you ask who does the work that used to be done women as prescribed by society, it is still women! What we have done is increase women’s burden in the name of empowerment. What we need to start doing as women’s rights advocates is to change gender relations and roles. We must critically think and analyse the unpaid care and domestic work in the whole economic framework.

On the powerful tool that is social media, Dinah is measured in her optimism: “I think that social media has created many new possibilities – politicians can now have direct access to their constituents and to the public in ways that they never could. Social media and technology as a whole has decreased the costs drastically of communication to the masses in a very short amount of time. It allows for connections across borders, time, age and space. But, as any other medium, we must not see social media as a panacea for all of our problems. We must not forget that not everyone has access to such technology, or the know-how to use it. It is a powerful tool whose outcomes depend on how they are used.”

Both Dinah Musinderwezo and Hibaaq Osman are steering committee members of the Feminist Alliance for Rights.

Paradigm Shift for the Current Women, Peace and Security Agenda

FAR Steering committee members along with activists from Jordan/Syria, Lebanon, Morocco, Palestine, Yemen, and Sri Lanka engaged in discussing the need for a feminist peace agenda in January 2019.  The meeting was held in Amman, Jordan, and was convened by Center for Women’s Global Leadership, the global coordinator of FAR, in partnership with ABAAD (MENA region) and Women and Media […]

March 18th, 2019. FAR, along with the Center for Women’s Global Leadership (CWGL), MADRE, and the Women’s Human Rights Education Institute (WHRI), co-sponsored the first global consultation with indigenous women leaders to discuss the development of a new CEDAW General Recommendation on indigenous women’s rights. The meeting was convened by the International Indigenous Women’s Forum (FIMI) and attended by indigenous activist […]