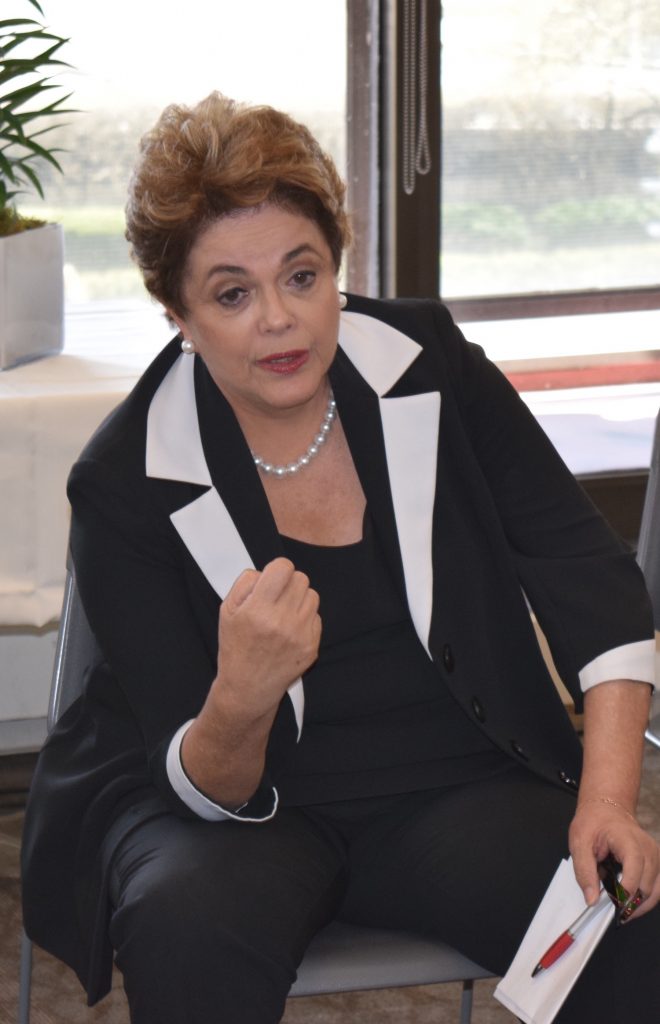 Friday, April 14 – Last week, the Center for Women’s Global Leadership (CWGL) hosted a luncheon with former Brazilian President, and the country’s first woman head of state, Dilma Rousseff to discuss feminist political leadership during a time of rising conservative politics around the world. Speaking and engaging with an audience of feminists, human rights organizations and academics, President Rousseff spoke about the critical role of women’s representation in leadership, the role of multilateral organizations such as the United Nations and the importance of human rights frameworks and mechanisms.

Feminist Alliance for Rights (FAR) Project Director Maria Luisa Mendonca outlined the grave political context that led to Rousseff’s impeachment last year. “Brazil had a parliamentary coup. The main reason for the impeachment of President Rousseff was to stop investigations of corruption against the politicians who are in power now, and to impose austerity measures that affect education, healthcare, housing, and other social programs.”

Rousseff addressed her political impeachment openly: “The political coup last year in Brazil was orchestrated by rightwing political parties and mainstream media outlets. My impeachment clearly shows how the political system in Brazil is steeped in misogyny. It was very clear to me that I was targeted because I was a woman; the traits that would have been seen as positive in a male leader were used against me to undermine my government,” she stated.

As the 2018 presidential elections approach, Rousseff addressed Brazil’s concerning socio-economic context by emphasizing its negative impact on the country’s more marginalized communities. “The current government has a 5% approval rating. I am worried about Brazil’s rural workers, and senior population, especially women. The poor and the lower middle class will be the most impacted by the current austerity measures. We have a complete breakdown of social protections. Our youth, children, and women are highly vulnerable. Removing me from power was a way to ensure the elimination of policies that were improving social and economic rights.” Rousseff also criticized current proposals to deregulate environmental protection and to eliminate limits on foreign ownership of land in Brazil, which will aggravate social inequality in the countryside.

Krishanti Dharmaraj, Executive Director of CWGL, set the tone by highlighting the importance of women’s responsible political leadership particularly as an inspiring force that can pave the way for true democracy to thrive both politically and in civil society. “But how do we ensure and support women’s political leadership that is accountable?” she asked Rousseff.
Rousseff responded by reminding how she became the target of impeachment for being a woman in power. “We have to acknowledge that women have much greater odds stacked against them. They have to work much harder and longer to be accepted. Women have to constantly prove their competence. For women to be leaders, they need access to education and resources to overcome the many barriers they face, and their greater vulnerability to violence. Unfortunately, male leaders are accepted much more easily than women, and are seen automatically as pragmatic and sensible.” Rousseff went on to articulate the necessary support for women’s access to political participation. We need more women to be in judicial power, we need women’s police precincts. But thankfully, we have tasted the power of education so there is no going back. We will fight onward till there is true and concrete equality.”

Opening it up to the audience allowed for an important and unique dialogue amongst feminist human rights leaders to engage with Ms. Rousseff on issues and questions that are crucial to their work and constituencies.

Lopa Banerjee, head of civil society for UN Women, inquired about the role of internationalism and solidarity at a time when neo conservative forces are using democratic processes for undemocratic outcomes.To this, Rousseff responded: “For true multilateralism to be effective, every participating entity or country has to be treated on an equal footing, otherwise, it is just imperialism at play. For Brazil to have been effective in multilateral efforts, we needed to be a part of the Security Council. First priority for Brazil is our relationship with countries in our neighborhood, in Latin America, before focusing on the world.” 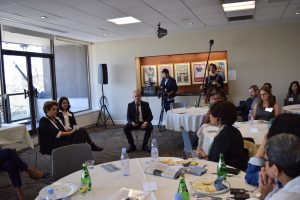 Gay McDougall, heading the UN Committee on the Elimination of Racial Discrimination, asked about the high rates of murders of Afro-Brazilians, with one being killed every 20 minutes according to an Amnesty International report: “How do you see this unfolding in Brazilian society and how can this disturbing trend be ended?” Ignacio Saiz, Executive Director of the Center for Economic and Social Rights (CESR) requested his views on the misuse of Constitutional amendments to freeze public expenditure and its subsequent impact on the Brazilian economy.

Rousseff highlighted the connections between racial discrimination and economic inequality. “Brazil’s history is marked by a deep connection to slavery and racial injustice. Today we see this manifest in how wealth is concentrated in the hands of the white Brazilian elite and the huge swathes of people mired in poverty. We need policies that enable this inequality to be systematically addressed. The freezing of public expenditure marks an erasure of democracy and democratic tools and will increase social and economic inequality.”

In her closing remarks, Rousseff acknowledged that overall she was more optimistic about the possibility of expanding multilateral efforts and for a stronger role for the UN and other multilateral institutions during her Presidency than she is now, given the current global political context, alluding to the political shifts in the US and countries of western Europe.

President Dilma Rousseff was on an academic tour of the United States – she keynoted the Brazil conference co-organized by Harvard and MIT earlier this month, and spoke at various universities, including Princeton, Columbia, Brown, and the City University of New York. The event organized by the Center for Women’s Global Leadership in New York on April 14th was a unique opportunity for a more intimate conversation with a remarkable leader.

April 29th marked the 100th day of Trump’s presidency. To mark this day, the People’s Climate March(PCM) was held in Washington, D.C. This huge march brought together thousands of activists, and organizers from across the country. Check out pictures that we took at PCM: Find out more

Last month, in collaboration with FIAN, Colombia, FAR  co-organized a regional meeting in Latin America in Bogota, Colombia, from June 27th to 29th. This powerful and critical meeting brought together women’s organizations in Latin America, working at the intersections of human rights, environmental justice and gender equality. Participants were representatives of women’s and social justice organizations working on a national […]