Feminist Speak Out @ #CSW61 organized by Madre, the Center for Women’s Global Leadership (CWGL) and the Feminist Alliance for Rights (FAR) 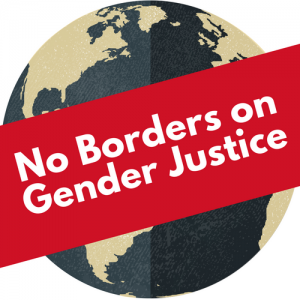 March 16, 2017 – As hundreds of side and parallel events dot the venues around the United Nations every year for the Committee on the Status of Women (CSW), this year is markedly different. The so-called travel ban has dampened travel plans for many feminist activists who would have been here otherwise. This ban by the current US administration is really a “racist, Muslim ban,” as Fatima Outaleb, a Moroccan feminist activist and a steering committee member of FAR reminded us, at the Speak Out co-organized today by Madre, CWGL and FAR.

Several women gathered at the Speak Out, to discuss how organizing women internationally has become more difficult, most recently with the harsh travel restrictions imposed by the Trump administration. Many women from the seven countries affected by the Muslim ban, have been denied visas to travel to the United States. Many women from countries not included in the travel ban were also denied visas, even if they had formal invitations from the UN, in addition to several reported cases of discrimination by immigration officials.

While the corridors and meeting spaces at the UN are filled with women from literally all over the globe, many are also conspicuously absent this year. As a response, the Speak Out event launched a symbolic campaign by leaving empty chairs at meetings with signs remembering the women who are not here as a result of racist policies by the Trump administration.

Krishanti Dharmaraj, executive director of CWGL, called for the need to reclaim the shrinking advocacy space for civil society at every level – from local and national to regional and international spaces: “We have the right not to remain silent,” she noted poignantly and powerfully. Krishanti also encouraged women’s participation at the UN townhall meeting that was slated for the next day, Friday, March 17th, with the new Secretary General, Antonio Guterres, as a way to put pressure on UN member states to protect free and safe civil society participation.

Yifat Susskind, MADRE Executive Director, said, “Every action we’ve taken this week to denounce right-wing authoritarianism builds momentum, and not just to protect what’s under threat. We’re also seeking every opportunity to advance our rights, build new and stronger alliances, and pressure leaders. At the Secretary-General’s town hall meeting, when women spoke out about xenophobic attacks on women’s right to political participation, the SG responded by acknowledging the empty chairs representing women excluded and by voicing opposition to policies that discriminate on the basis of nationality, ethnicity or religion. He understands that the architects of these policies also threaten the UN itself. The parallel offers a strategic opening for women’s movements to not only defend the UN but to call for a realignment of its status quo in favor of gender justice and human rights.”

Fatima Outaleb emphasized the need to hold governments in the Global North accountable in relation to  their role in arms trade, anti-refugee and anti-migrant policies,  which are not only detrimental to women’s rights but generate economic and social instability, and environmental destruction.

Speakers read powerful testimonials from women human rights defenders and activists who live under threat of increased violence but continue to organize all over the world. From Yanar Mohammed in Iraq, to indigenous women in Guatemala, and Sudanese women human rights defenders, their testimonials evidenced harsh realities, danger and exclusion that they continue to face. This brings an even greater responsibility to organizations in the Global North to facilitate access to women from the Global South in advocacy  spaces. International solidarity is the starting point to continue our collective struggles for women’s rights.

Read the letter to CSW signed by various feminist organizations

Read the statements by women human rights defenders who could not travel to the United Nations events due to the travel restrictions imposed by the US government.

When Hibaaq Osman or Dinah Musinderwezo speak, the world listens. Especially the world of human rights, gender equality and the likes of the new UN Secretary General at the 61st Commission on the Status of Women (CSW) earlier this March. Hibaaq Osman founded and since founding it in 2005, she leads Karama, an organization that builds the strength and influence […]

Paradigm Shift for the Current Women, Peace and Security Agenda

FAR Steering committee members along with activists from Jordan/Syria, Lebanon, Morocco, Palestine, Yemen, and Sri Lanka engaged in discussing the need for a feminist peace agenda in January 2019.  The meeting was held in Amman, Jordan, and was convened by Center for Women’s Global Leadership, the global coordinator of FAR, in partnership with ABAAD (MENA region) and Women and Media […]

Sexual and Reproductive Health and Rights in Kenya

FAR organized a consultative session on the effects of Gender-Based Violence (GBV) on women’s Sexual and Reproductive Health and Rights (SRHR) on November 8th, 2019 in the eve of the Nairobi Summit on the International Conference on Population and Development (ICPD).  The meeting was attended by feminist and SRHR activists from Nigeria, Kenya, Sierra Leone, Uganda and South Africa, working […]