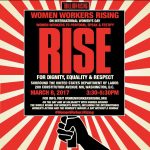 Washington, DC – On International Women’s Day, Wednesday, March 8th, women are rising at a massive rally in DC – WOMEN WORKERS RISING. Women workers will come together and RISE for Dignity, Equality, and Respect at and surrounding the US Department of Labor in DC. Organizers are calling all women and allies to come and be in solidarity with women workers – for an end to workplace violence and harassment and to promote pay equity, one fair living wage, paid leave, and labor rights at work. This rally will be on the day – and in solidarity with – women around the world rising for women’s rights, including the International Women’s Action and The Women’s March: A Day Without a Woman.

Sexual harassment and violence against women workers takes place every day at workplaces across the country, in every occupation and industry. From restaurant workers, teachers, retail workers, domestic workers, and at-home mothers to nurses, farmworkers, factory workers, workers with disabilities, federal workers, actors, office workers, company executives, and more, workplace violence is part of making a living for many women. In many cases, women don’t or can’t speak out or seek justice for fear of losing their jobs. All of this is happening in a global economic reality where it is increasingly difficult for women to earn a livable wage.

On March 8th, working women from multiple sectors will rally and surround the Department of Labor in a show of unity, demanding that women workers be seen, heard, and treated with dignity, especially by the new Presidential Administration and Department of Labor leadership. They will be joined by allies in solidarity as they Dance, Rise, and Resist the bullying, attacks on workplace standards, and politics of exclusion practiced by the administration.

The event will feature live testimony and rallying cries from a diversity of voices, performances, videos, a flash mob, poetry, music, and much more. Through an artistic uprising, collective expression and creative resistance, women workers and artists will share personal powerful moving testimonies experienced on the job. We will come together to witness and listen to women workers who hold this country up but often remain invisible. The free event will take place from 3:30pm – 5:30pm and will honor the sacred and valuable work of women around the world, in all its forms, by demanding safe, violence-free workplaces.

WHAT: Women’s Worker’s Rising: A Rally with Women Workers on International Women’s Day

Rise in solidarity with women workers, join us.