This is the first interview in a three-part series with FAR allies who have participated in our previous webinars. Emilie Pradichit (Founder & Executive Director, Manushya) first shared Manushya’s campaigns with FAR at our webinar entitled “State Violence Against Women Protesting Femicide and Other Forms of GBV” held on March 23rd, 2021, during the Commission on the Status of Women’s annual session.

Angie Son: Who is Emilie Pradichit?

Emilie Pradichit: My name is Emilie Pradichit. I founded Manushya Foundation with the mission to ensure the power of marginalized and political communities to be at the center of human rights responses and decision making processes that concern them. We want to make sure that governments put people over profit. Another thing that we focus on is digital rights because we want to make sure that we can navigate the digital space freely and we can restore our democratic digital space, especially in Southeast Asian countries. Another focus is on, of course, women’s empowerment. We work with Indigenous women and migrant women. We support them [through] community-led research. Finally, we work on U.N. human rights mechanisms.

Can you talk about the government’s forest reclamation policy in Thailand and also the specific impact it has on women and girls?

In 2014, the military took over the country. And right after the military took over the country, they passed the forest reclamation policy. We all thought that it was coming from good intentions at the beginning because it was to reclaim the forest. But when it came to its implementation starting in 2015 and 2016, we started seeing that most of the people that were being evicted from the land were poor villagers and Indigenous people. The first forest reclamation policy was meant to criminalize capitalist investors and to criminalize the big companies that were destroying the forest. Instead of criminalizing companies, the Thai government has been going after poor villagers and Indigenous people, saying that they are destroyers of the forest, instead of seeing them as protectors of the forest. The people who have been the first impacted have always been women because women are the ones that are protecting the land. When you are within the Indigenous communities, you will notice that men would work on the land, but mostly they will try to go in the city and they will try to work in factories while a woman will be taking care of the land.

How does the government benefit from evicting those women from their lands? Why do they not focus on the big corporations instead like they said they were going to?

Because the Thai government benefits from the big companies. [The government] is not making profit by having villagers living in forest land, but we also believe that the strong incentive behind the forest reclamation policy and the reason they are going after poor villagers is because the Thai government is trying to prove to the World Bank that the driver of deforestation in Thailand is the cultivation of crop by poor villagers. They have received 3.6 million U.S. dollars from the World Bank. The [government is] trying to show to the World Bank that they are trying to reduce carbon emissions, that they are trying to mitigate climate change by passing this policy and by going after poor villagers to show that [the villagers] are the direct first driver of deforestation. But there’s no credible evidence that the crops that villagers are cultivating are the drivers of deforestation.

Could you talk about what the Thai government could actually do to meet the international commitment of reducing carbon emissions and combating climate change while actually protecting the villagers and Indigenous people that live in the forest?

The Thai government should actually implement its forest reclamation policy the way it should have been implemented. Going after big companies, those who are actually destroying the forest, who are still operating in the forest area or in public land, and who are still polluting the environment. Stop putting economic growth over people and start looking at real evidence. Everywhere in the world, there is evidence showing that Indigenous are protectors of the forest. So the Thai government has to implement the forest reclamation policy and follow scientific data rather than prejudices against Indigenous people and poor villagers.

How does Manushya support the villagers? Also, what is the importance of using an intersectional lens in your work?

We are a women-led, feminist organization and when we work on UN human rights mechanisms, we build intersectional coalitions. Within our team we have two transgender women, one gay man, we have ethnic minorities; we really try to make sure that we walk the walk within our own organization. And when we are bringing communities together, we are bringing different sectors, from sex workers to Indigenous women, to migrant workers, to people from the LGBTI communities, human rights defenders, and environmental activists. So we’re bringing a broad range of different sectors to all advocate together for the same cause. And when you bring together people from different sectors and you apply an intersectional approach to your work, it actually builds understanding among society.

That’s how we were able to add support to specific cases, because people would bring their friends and the coalition would get bigger and bigger. For example, the Sab Wai villagers, they joined one of our workshops and they were brought by others. [At this workshop], Nittaya, the community leader, told us that she might go to jail in May 2019. The second we heard that we went on the ground, we went to meet the villagers. We gathered as much information as we could and we waited for Nittaya’s court hearing. She was found guilty. She went to jail. So once we knew that she would go to jail, it would mean all the 13 other villagers would go to jail. So the second she went to jail, we sent information to UN special rapporteurs to send a communication to the Thai government. In October 2019, [the UN special rapporteurs] went on the ground to meet with the Sab Wai villagers. In November 2019, they issued a list of villagers to not be evicted by the forest reclamation policy and included the Sab Wai villagers in that list. 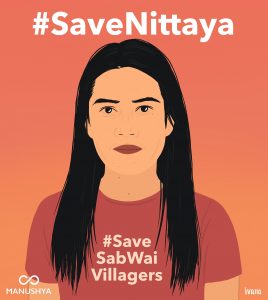 Once we got that list, we submitted a petition to the Supreme Court of Thailand. We went to the Supreme Court for Nittaya, she was the first one to have her case heard by the Supreme Court. The verdict came on the 3rd of March, 2021. We believe that the Supreme Court tried to protect the image of Thailand because they still found Nittaya guilty, but they didn’t put her in jail. They didn’t put her in jail because we were doing all this campaigning and because of the pressure from the U.N. special rapporteurs. But in the end, she was still found guilty. Now we are trying to sue the World Bank to pay compensation for the villagers and for the World Bank to provide corresponding relocation for the villagers. We don’t know what’s going to happen to the 13 others, but we still have to fight for them to get compensation.

Here is Manushya’s submission to the U.N. Special Rapporteurs: https://www.manushyafoundation.org/unsr-submission-sai-thong-np-case

Angie Son is a senior at Rutgers University, majoring in Women & Gender Studies and minoring in Labor Studies. Angie works at the Center for Women’s Global Leadership as FAR’s intern.