The Feminist Alliance for Rights is guided by the principles of equality, justice and non-discrimination that underpin the international human rights framework. We strive to ensure that women[1] and girls from the Global South and from marginalized communities in the Global North are visible and active in key political spaces and that they are able to demand the conditions that are needed to fully enjoy their universal human rights in all their diversity.

We recognize that women are not a homogeneous group and while the majority continue to experience sexism and misogyny in one form or another, women in certain contexts enjoy privileges. The experiences of gender and sex-based discrimination that women are often forced to endure are compounded by other systems of oppression such as racism, colonialism, classism, heteronormativity and ableism. There are communities that have been historically discriminated against for centuries resulting in female populations who carry the inter-generational trauma of their oppression and exist in a persistent state of vulnerability marginalization, and danger. The convergence of multiple and intersecting factors of discrimination significantly increase women’s vulnerabilities to further discrimination, violence and exclusion and hinder their access to opportunities, resources and appropriate redress for violations of their human rights. 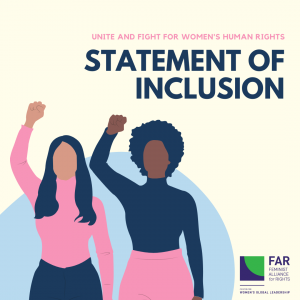 [1] The concerns relating to the vulnerability, marginalization and exclusion of women as expressed in this collective statement extend to all of these other populations (female, femme and gender non-binary populations) based on our respect for the human rights of all persons.

The following statement has been endorsed by more than 1600 individuals and women’s networks and organizations from more than 100 countries, to demand States the adoption of a feminist policy to address the extraordinary challenges posed by the COVID-19 pandemic in a manner that is consistent with human rights standards and principles. This initiative was initiated by women from the Global South […]