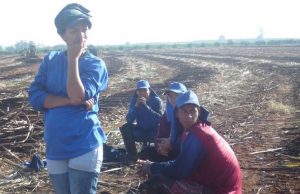 From the perspective of women’s grassroots movements, defending basic rights to land and food is a constant struggle. Around the world, the expansion of agricultural production for export, controlled by large landowners and corporations, continually displaces rural communities. They are forced to leave their lands and means of subsistence, and become vulnerable to labor exploitation in large plantations or in urban centers, facing a condition of poverty and hunger.

The stories of Brazilian peasant women are repeated by many generations all over the country, as Maria Souza, from Pernambuco state, explains: “I started working at 11 years old to help my mother in the fields, when she was pregnant. My mother got very sick and died when she was 59. I’m 42 now and I think the same will happen to me”. In the state of São Paulo, Lusiane dos Santos describes a similar situation: “I’m 38 years old and started cutting sugarcane when I was 20. I had to stop going to school because my father left us and my mother sent me to work.”

Monopoly over land and market speculation increases food prices, affecting low-income women disproportionately. The case of Brazil illustrates this situation, since it has one of the highest levels of land concentration in the world. Currently, there is an increasing re-concentration due to international financial speculation in rural land markets. After the 2008 economic crisis and the collapse of the housing market in the United States and Europe, international speculative funds started to “migrate” to farmland markets. This process increases monopoly over land and expands mono-cropping of commodities for export, causing environmental destruction and displacement of rural communities that produce the majority of food for internal markets.

According to the Brazilian Institute of Geography and Statistics (IBGE), 30% of households face a situation of food insecurity in the country. At the same time, the most recent census by IBGE shows that small farmers are responsible for 70% of food production, and for 83% of job creation in the countryside, but occupy only 20 percent of agricultural land. In recent years, there has been a greater degree of market concentration, particularly in agriculture and energy sources, such as land, water, mining, and oil. Large corporations receive the majority of State credit at subsidized interest rates.

In this context, the resistance of rural women is crucial to deal with the simultaneous economic, ecological and food crises. Women in rural and urban centers face specific challenges in times of crisis, since they usually take the main responsibility for social tasks in their households, such as providing food and health care. Therefore, policy proposals to cut governmental support for social programs and the increase in food prices mean an extra burden for working women. In addition, the displacement of rural communities forces women into the worst jobs on plantations and in urban areas.

Carlita da Costa is the president of the Cosmópolis Rural Workers Union, in the state of São Paulo. In a field dominated by men, Carlita has been able to lead one of the strongest rural unions in Brazil. She started cutting sugarcane at a young age in order to provide for her three children. She was able to form a union to struggle for labor rights, and continues to focus on organizing women. But she knows that in order to overcome their situation of poverty and oppression, they need to demand structural changes in the land and food systems.

“It’s common to hear coughs and screams in the cane fields. We have to inhale pesticides and the ash from burned cane. Once I fell and felt the taste of blood in my mouth. I broke my arm and could not work anymore. I have lung problems and feel sick from that horrible work. I saw that cane cutting was killing me,” says Carlita.

The agricultural model of mono-cropping and land concentration reduces the alternatives for peasants to sustain themselves. Many men migrate to different regions in the country, looking for seasonal jobs at plantations, and some never return to their families. For women it’s more difficult to find an alternative, so they usually stay with the responsibility of caring for their children and elderly parents. However, some women migrate in search of jobs, as in the case of Ana Célia: “I’m 24 years old and I came from Pernambuco to work in São Paulo. The company only pays for 50 kilos of sugarcane a day, even when we cut 60 kilos. My whole body hurts. I need to leave this job because I’m getting sick. The cost of rent, water and electricity is very high, and after paying for everything, there is nothing left from my salary”.

Edite Rodrigues tells us that she is 31 years old and came from Minas Gerais state. “I have three kids and need to support them, but I can’t wait to leave this job. At the end of the day, my body is broken, and I feel like vomiting. But the next day we need to start all over again. The pollution from burning sugarcane is horrible for my lungs, in addition to the effects of pesticides. I make about US$60 dollars per week, but there is no fixed wage. It depends on how much we cut. For women it is much worse than for men because they give us the worst jobs, for less pay. We depend on food stamps or we go hungry,” says Edite.

Rural women face a dual situation of oppression, since they are also responsible for many tasks, including providing food for their families. Ivanusa Ribeiro, who works at a sugarcane plantation in the state of Pernambuco, explains: “I wake up at 2 in the morning to start working at 4am, and I only stop at 3pm. After getting home, I still have a lot of work to do, cleaning the house, cooking for my kids and my husband”.

Nelma dos Santos, who is also from Pernambuco state, says that this situation would only change if the government gave more incentives to agrarian reform and small farmers. She also demands access to an education system that would be meaningful to her life in the countryside. Like many other women peasants, she fears having to migrate to urban centers, where she would face unemployment or exploitation in low-paid jobs.

On the other hand, the continuing land concentration and mechanization of agribusiness make it more difficult for women to find jobs in the countryside, where they receive less pay, suffer humiliation and sexual harassment. Some of their main demands are regular working hours, equal pay, maternity leave, access to health care, child care and social benefits.

Odete Mendes, who works at a plantation in São Paulo, says that she cuts about 10 tons of sugarcane per day, but only earns US$100 dollars per week. She pays half of her salary on rent for a very small room, and has to cover all other expenses at her house. “I cannot stay in this job. It’s very hard. Once I broke my arm, I constantly feel a lot of pain in my hands, my lungs suffocate, and sometimes I think I will die in the fields,” says Odete.

These testimonies illustrate the importance of women’s rural movements that advocate for the common use of natural resources, including collective land rights. For women’s peasant movements, it’s urgent to continue denouncing the impacts of land grabbing and displacement of rural communities. Large landowners’ monopoly over land prevents other economic sectors from developing, stimulating migration and submitting women workers to degrading conditions. It’s urgent to demand agrarian reform, as well as other governmental policies to support diversified and ecological agriculture.

These measures should include education, ecological technical assistance and inputs, as well as infrastructure and social protection, such as direct subsidized credit, transportation, water and energy. Another important demand is to secure markets for women farmers who produce high quality food at affordable prices. Women’s grassroots movements are promoting a new agricultural system based on local and ecological food production.

Take Action! Sign a petition supporting the adoption of the UN Declaration of Peasant Rights!

FAR’s governance structure consists of a Steering Committee composed by feminists representing constituencies and organizations that have regional representation and work at the national level.The Steering Committee members are the main focal persons of FAR in their regions.  In January 2020, our alliance welcomed two new members from the Caribbean and Central Europe, who will provide guidance and support to […]

When Hibaaq Osman or Dinah Musinderwezo speak, the world listens. Especially the world of human rights, gender equality and the likes of the new UN Secretary General at the 61st Commission on the Status of Women (CSW) earlier this March. Hibaaq Osman founded and since founding it in 2005, she leads Karama, an organization that builds the strength and influence […]